My name is Sokhy. I am 23 years old. I was born in Stung Treng, in the village Hang Kosouen, just across the river from the town of Stung Treng. I have six brothers and sisters. I am the eldest of them. My mother was born in my village, in Stung Treng—my father in a neighboring village in the province. They are both rice farmers. My younger sister, the second-oldest, has a family. She’s 21, and was married when she was 19. She lives at my mother and father’s house. Her husband is from the same village as my father, O Trei.

I have finished high school; I took the exams for 12th grade. We didn’t have the means for me to learn more. I came to study at Le Tonlé instead, in 2014. In high school, since my village was across the river, I lived with my aunt in Stung Treng town, to avoid making the crossing every day. I liked living with her, but our school was far, and I had to ride there and back on a bicycle. Sometimes, too, we had money for me to learn; other times not. So most of the time, I felt like I couldn’t follow my lessons. I had to keep working to catch up with the class. My favorite subject was physics. I was better at it than all the other subjects. When I didn’t have money to go to school, I would study it at home, but it wasn’t the same. I liked living in Stung Treng anyway, though. I had more friends than I did in my village.

I was 21 when I finished high school. When I finished, when I passed my exam, I wanted to go study more, in the university, but I was out of money. I spent one year free—but during this year, I became very sick. I could not do anything, and I could not find a job. I had lingering malaria—a high, persistent fever and a headache. Eventually I went to the hospital and was helped. I had a headache and stomachache and fever for a long time, though.

The hospital was expensive. I had to pay for medicine, for the serum they gave me, for the IV itself. My parents had some saved, thankfully. They are poor, but they were able to help. I still felt sad. I was with my mother and father, but our hearts were all difficult.

I heard about Le Tonlé on the radio. I registered, then took the exam, then interviewed. I felt very happy to come. I’ve made, now, so many new friends, and I’ve seen a lot of things that I haven’t seen before. It is a new thing, for me, to live with my friends in a team, to work together and cook together—we cook quite well—and speak out our hearts. When I’m finished, here, I don’t know what I’ll do. It’s hard to find a job in this town, though my teachers will help me. It might be far from Stung Treng, where I work. I’m afraid to do work far from home, and afraid to do jobs about which I know very little. I will do any work I can find.

When I do have a job, I’d like to go to university to learn more. I don’t care what province, any at all. I’d like to learn English and computer skills—I’d like to get better with computers. If I had a good job, I think I could support myself to do this.

I have spent time in the hospitality industry and traveled quite a bit and the energy and aesthetics (simple beauty) of Le Tonlé is among the top I have ever experienced. I think you are doing a really, really incredible job there. I hope to return to Cambodia in the near future and come back.

I've read so many bad things about accommodations in Kratié. When I found this new place (opened in Dec 2013) I sent them an email and got a reply from them the next morning.

Rooms are clean and beautiful, beds are comfy, I love the stylish showers (with hot water and free shower gel and shampoo).

You can rent a bicycle from them, but they are actually working this through other companies.

I highly recommend this place, they deserve their first place in Kratié.

I've been traveling around Cambodia for roughly 3 weeks, and I can honestly say this is my favorite guesthouse in all of Cambodia. This guesthouse is a beautiful building, modeling the traditional wooden Cambodian houses. It has a restaurant on the patio downstairs, friendly & helpful staff, amazingly comfy beds, and showers that are nicer than my shower at home. When you're on the road for a while, it's refreshing to stay at a place that is comfortable, clean, and relaxing - perfect for escaping the mid-day heat.

The food tasted great and was reasonably priced. We had almost every meal here, and quickly became addicted to their lime juices and spring rolls. :) Just know that their kitchen closes at 8pm.

I also loved that Le Tonlé is also a Tourism Training Center, teaching local Cambodian students the skills of hospitality and tourism. While we were staying here there was a class of 6 new students learning the guesthouse hospitality skills. They would come take our orders in the restaurant, with the guidance of the staff (their teachers). While some students were nervous, they were always cheerful, very thorough, and always got our order right.

Le Tonlé Guesthouse in Kratie is an extension of the guesthouse in Stung Treng and is a sister-company to CRD Tours. It opened 14/12/13 and is doing a phenomenal job for only being open 2 months.

Note: St. 03 is the street after the Canadia Bank, if you're walking down the river front, north of the bus station. If you're coming from the bus station walk towards the river and turn right (it's really not too far, but it can seem far if you arrive at night).

I didn't stay in the guesthouse but have dinner in the retaurant: the place is very clean and beautiful, people are really nice, smiling and lovely, and food is really good and cheap.
Le tonle is a training tourism center so don't hesitate to go there to help them !

The wooden house is a cosy oasis in Kratie. I loved the atmosphere in the Tonle Center. The food is delicious and will be served with a nice decoration. The students are realy friendly and all realy nice. And at least, the (shared) bathrooms are quite good. Especially the shower was the best I ever had in asia! Great place to stay and a great place what should be supported!
10$ per room is a realy good price, also a higher price would be o.k.!

The brand new guesthouse is gorgeous, Mr. Bunly and his staff are amazing, and the peaceful location just across from the Mekong River is everything thing a traveller could wish for. Part of a larger initiative to employ young at-risk Cambodians in the burgeoning tourism industry in Kratie, the guesthouse is run by a small staff of graduates (including Mr. Bunly!) of the 12-month Stung Treng program, and acts as a teaching lab for current trainees from the Stung Treng center.

The restaurant downstairs has lovely outdoor seating, and a wide delicious drinks, appetizers, entrees, and a full bar. The iced lime juice (3000 riel), vegetable spring rolls ($2.00), and pomelo salad ($2.50) were our favorites. The building is made of wood, so they do not allow smoking upstairs, and we particularly appreciated the non-smoking atmosphere in the restaurant.

Unfortunately their online presence is minimal, but growing. For convenience I included a few informational links below.

Established in 2012, the Kratie branch of Le Tonlé's sister organization CRDT (Cambodian Rural Development Tours) is located just down the street from the guesthouse, and open for booking tours Monday-Saturday, 8am-5pm http://www.crdtours.org/

The first Tonlé Tourism Training Center Guesthouse was established in 2007, and is based in Stung Treng, about 3 hours north of Kratie Town.
http://www.lonelyplanet.com/cambodia/stung-treng/hotels/tonle-tourism-training-centre
https://www.facebook.com/LeTonle
http://letonle.org/about/

We're not around right now. But you can send us an email and we'll get back to you, asap. 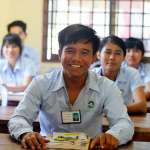